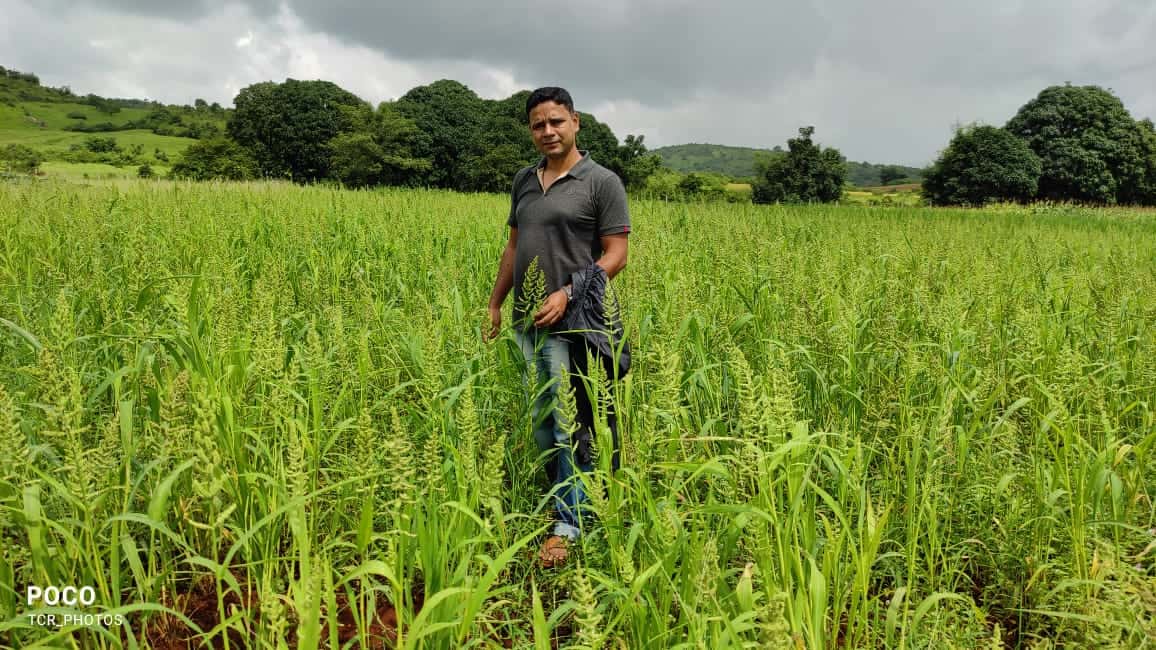 Barnyard Millet (Echinochloa frumentacea) is widely cultivated as a minor cereal for food as well as for fodder in India. In India, it is grown mainly in Uttarakhand, Uttar Pradesh, Karnataka, Tamil Nadu, Andhra Pradesh, Bihar, Gujarat, Chattisgarh, and Madhya Pradesh. In Odisha, I have done a trial of it and want to share my experiences with you all. This crop can bring diversification in crops as well as dietary diversity in the food.

Due to the presence of high dietary fibre content and rich nutritional profile with iron, calcium, magnesium and zinc it is gaining importance as health food. This millet contains 15.2mg/100 gm iron, 10.1g/100gm crude fibre, 11.2 g/100 gm proteins and 4.4gm/100gm minerals. The essential amino acids such as lysine, cysteine and isoleucine are found in this millet. The low glycemic index(GI) makes it suitable for diabetic patients. It is also recommended for infants and pregnant women.

It needs loam or sandy loam soil having a sufficient amount of organic matter. It grows well there is an annual rainfall of 500-700 mm. It is tolerant to a wide range of temperatures. It can grow up to an altitude of 2700 metres.

How I started my Barnyard Millet Experiment:

As this crop was very new to me as I have not seen it growing in Koraput. I thought I can do the experiment following all the package of pratices. I must be thankful to Agriculture Research Station,Viziniagram for providing me the seeds. The variety was VMBC-331.

The seeds were treated with Beejamrit to avoid any diseases. The 27 days seedling were transplanted in a row maintaining a spacing of 10 inches. At the time of planting, vermicompost was applied as a basal dose. As it was grown organically, Jeevamrit was sprayed 3 times every 20 days interval.

Weeds were the major problem, here we have used cycle weeder to remove the weeds. It saves times time and labour. two times weeding was done with weeder at 25 days and 40 days after transplanting. Weeding is essential for good yield.

Generally, Barnyard Millet requires minimum irrigation in Kharif season. However, if the dry spell prevails for longer period, then one irrigation at 25-30 days of sowing and second irrigation at panicle iniatiation stage 45-50 days after sowing to be given for better yield.

During, my experiment there was no problem of any diseases. But we need to be very careful of Smut diseases at different growth stages. The crop may be affected by head smut, grain smut and kernel smut.

There was no incidence of pests but there may be an occurrence of Shoot fly, Stem Borer, and termites during the seedling stage. The damage of Shoot fly normally occurs in the seedling up to six weeks old crop. As a result of feeding the central shoot starts drying and shows the typical appearance of a ”dead heart” in the early stage.

Learnings from this Experiment:

During, the seedling stage there was attack of termites. The termite live underground in colonies and attack the young seedlings as well as grown up plants. Infested plants wither and ultimately die. Wilting plants in patches are the symptoms easily observed in the field. I used Neem Oil-1500 ppm @5ml/litre and drenched the soil properly to stay safe from termites.

During transplanting, if the seedlings crosess 25 days, then it is recommended to plant two seedlings per hill and it gives better yield than single seedling.

I was very happy with the experiment, as it has given me the hope that Barnyard Millet can be grown in Odisha and farmers can easily cultivate this crop.

I promote Millets from Farm to Plate through my Youtube Channel and Blogs. If you are new to my channel, you can subscribe to my channel.