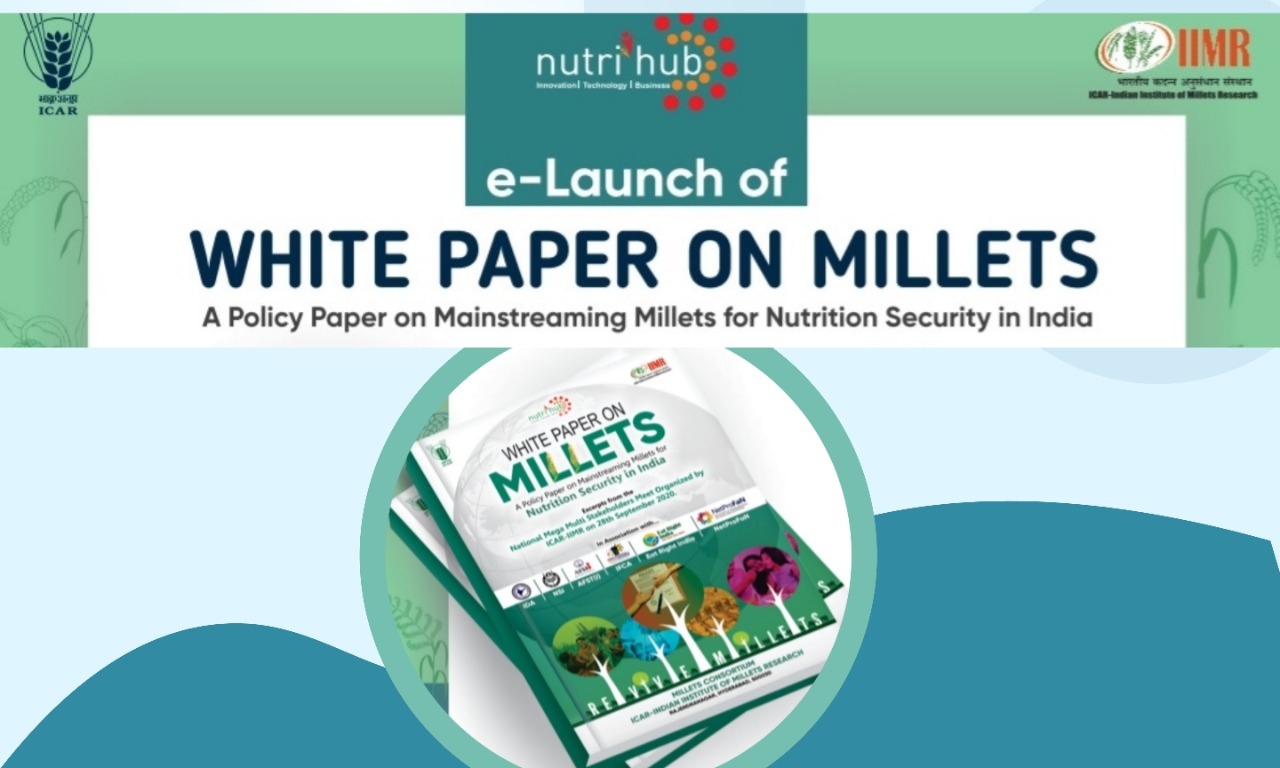 e- Launch of White Paper on Millets – A Policy Paper on Mainstreaming Millets for Nutrition Security in India was done by the Chief Guest of the day Shri. Amitabh Kant, IAS (CEO, Niti Aayog, Government of India) on 4th, June 2021. It was organized by Millets Consortium – ICAR-Indian Institute of Millets Research, Hyderabad.

The event started with a welcome address by Dr.Dayakar Rao, CEO, Nutrihub. It was the desire of Shri. Amitabh Kant, IAS to come out with a scaleable model which will outline all the gaps. The White Paper on Millets is dedicated to the marginal farmers of dryland regions of India. The demand for millets value chain has been established with various stakeholders. In order to create demand, we need to scale up the value chain and penetrate against the pilot-scale success said, Dr.Dayakar Rao, CEO, Nutrihub.

There is a great need to look up the successful scalable model implemented in certain states. We need to replicate them by addressing the gaps. So, by ever-rising lifestyle diseases, there is a need to establish nutrition food and to tackle micronutrition.

With the passing of the recent resolution by the Indian Government to observe 2023 as the International Year of Millets by the United Nations General Assembly. Our responsibility has increased tremendously in propagating the goodness of millets to various communities.

This particular policy paper addresses the most facing challenges and tries to address various gaps that are currently in the value chain and trying to take it forward.

Inaugural Remarks – on Launch of White Paper on Millets

An inaugural remark was given by Dr.Venkatesh Bhatt, Principal Scientist, ICAR-IIMR. He said, In the last decade, it had been a very fruitful journey for IIMR, Hyderabad in partnership with the Government of India. Millets are being positioned for the benefit of both farmers and consumers. It is very crucial for the country’s effort side. So, that all the stakeholders, major players shaping up the millets.

Dr. Raj Bhandari, Member, National Technical Board of Nutrition and Health at NITI Aayog: Tech Advisor to VSTF, GoM, IIMR, Poshan IMAM said that- Not that we have invented anything new but our sincere effort to restore the ancient grains back to the glory. He shared some shocking facts about malnutrition in the world. 1 in 2 people on this planet is malnourished.

And here, India is no exception. So, if we look into the number of chronic hunger, the world over has increased by 30 million up to 800 million. The deficiency of vitamins and minerals is 2 billion. Overweight and obesity which is showing a rising trend, 1.9 billion which over lapse the micro-nutrient deficiency.

Millets are a big part of the solution because it is a cross-cutting issue right from agriculture to nutrition to health.

Now we talk about one health one planet which is initially started as a concept and now it is graduated to become a movement. So, all over we need to have a synergy of all the sustainable development goals.

If you look at India historically, we were strong, sturdy, and tall. But over recent survey shows that we have a large population which is stunted. As you know with stunted children we would have a stunted economy. Stunted also lead to poor cognition and impairment and also productivity losses. This white paper on millets will bring all stakeholders including businesses together.

Government is proactive in addressing some of the challenges and we have great programs. Poshan Abhiyan is proactive in taking optimum care of children through a social household approach for nutrition.

Recently, launched by NITI Aayog the Poshan Gyan, the digital repository and dynamic platform for 9 thematic areas to promote nutrition. Millets are one of the thematic.

ICAR-IIMR is a great laboratory for research and development and we are working towards showcasing bio-active ingredients of millets.

Awareness is the key to behavior change. Start a healthy gossip campaign for the goodness of millet. Sustainable business model to enable to do positive things. Millets is no longer a choice, it is imperative.

Guest of Honour on the Launch of White Paper on Millets

Dr.Angamuthu, Chairman, APEDA said, Millet is our treasure, time has come where we should export our products to other countries. But we cannot export millets as fresh products, we have to export as processed food. We have to give a positive narrative about millets o the global citizen. So people will appreciate what kind of product it is.

We are very strong in millet production and we have organized form of research and development and we have good product range. Now the time has come, APEDA will want to do work on this and we will do it in the years to come.

Global promotion and outreach strategies for exclusively for millet through our embassy, India’s diaspora to the global audience.

Sourcing of millets, when seeing the entire country prospective, it is not grown as other food crops. It is not grown in clusters and organized forms. It is grown everywhere, from Sothern to Western, Central, Eastern, and Northeastern states.

Right source and Quantity are very important to export. All the basic requirements of importing countries prescribe some standard SOPs. We have to follow SOPs and teach our farmers and export this millet.

We should take the help of the State Agriculture Department to form FPOs. FPO concept is penetrating so nicely every year. Millet Clusters is the other activity.

For global promotion, we should take the help of ICRISAT. By default, Indian Millets are organic. So we should name it miracle produce/Organic produce.

APEDA is setting an export promotion forum with all the stakeholders to develop further product promotion, diversification and reach all our audience. Capacity building Programmes for Millet growers. We are in the process of promotion strategies and exclusively product promotion with all stakeholders. Definitely, we will do wonders in the days to come.

Dr.Ashok Dalwai, CEO, National Rainfed Area Authority, Government of India said, Promoting millets is not an invention, it is also not discovery but it is certainly a Rediscovery. Some people know the value of millets. There is a large number of people in this country who do not know or have forgotten the value of millets, particularly the new generation.

It is actually time to take forward the commitment of millets by educating all concerned. Now we need to have an ecosystem approach. That means when we try to optimize income to the farmers, also keep in mind the necessity of sustaining the production ecology of planet earth and also with the country itself.

India is a carbohydrates surplus, it is deficient in terms of protein, fats, minerals, vitamins, and also in terms of amino acids. So to re-address agriculture, we need to keep in mind the ecosystem. There is to be a demand-led approach, where we create the need of buying millets because consumers are interested in maintaining their health and they are committed to the welfare of their body and mind.

Unless we do that kind of awareness and reorientation, just production is not going to help, there is a large number of alternatives just like paddy. There must be a balance between demand and supply of millets.

Millets are C4 plants and genetically they have the ability to give more yield than wheat and paddy. We need to tap the particular genetic potential and see how the yields will go from 1 tonne to 2-2.5 tonnes per hectare. Unless we are able to achieve high productivity, we will not be able to gain advantages in terms of inter-crop comparison.

We must not only give better market opportunities, better procurement rate but simultaneously higher yield, because only a higher yield multiplied by a higher rate in the market, is what is going to convince the farmers.

From the Rainfed Area prospectives, I must say whatever we do, when we utilize the entire capacity of water which is about 4000 billion cubic meters, we will still be left with 51% of our cultivated area under the rainfed system. Hence, under the rainfed system, it is these millets that are more resilient. Under a rainfed system, millets have low carbon footprints, are highly energy-efficient, and are simultaneously water efficient.

We need to convince farmers to adopt, backed by research, the Ministry of Agriculture and Policy.

Chief Guest address on Launch of White Paper on Millets:

Dr. Amitabh Kant, IAS,(CEO, NITI Aayog, GoI) said, India is traditionally been the largest millet producer in the world with a production of 16 million tonnes and it is part of the diet since the century. However, despite this, the consumption of millets is being low and declining. The area under production and productivity of Nutri-Cereals in comparison to Rice and Wheat has been less.

From 1966 to 2017, the total area of cropland harvesting the major millet crop i.e. Jowar, Bajra, and Ragi has grown in India. It is almost half the crop of the country.

On the other hand, it is disturbing to note, India’s performance in nutritional indicators like stunting and underweight, obesity, and hidden hunger. During the journey of food security, Nutritional Security has somehow not been the primary focus, which has resulted in the current status of malnutrition, the rise of non-communicable diseases.

The pandemic has actually further accelerated the problems and pushed many vulnerable Indians to malnourishment. In such an unprecedented time, I cannot over-emphasize the importance of millets as Super Cereals rich in macro and micronutrients, protein, calcium, iron, zinc, vitamins, folic acid, and so on.

That not only provides nutrition security but also helps in the battle against malnutrition both under and over nutrition. Moreover, Millets are climate-smart crops that can withstand agro-climatic conditions.

Ministry of Agriculture is already implementing a sub-mission in Nutri-Cereals under National Food Security Mission, which aims in improving production and demand for millets through a scientific and market-oriented approach.

It is also encouraging to see some states like Karnataka, Odisha, Andhra Pradesh, and Telangana have included millets in their safety nets programs like ICDS and Mid-day Meal. In addition to the steps taken so far, focus Research and Development, Awareness, promotion in business incubation, entrepreneurship, intense Policy are necessary for Mainstreaming Millets.

Millets are also coming to the global forefront. A recent resolution by the United Nations General Assembly to observe the year 2023 as the National Year of Millets for emphasizing the importance of nutrition-rich crops in climate-changing conditions is one step in this direction.

The White Paper on Millets is therefore very very timely and steps towards making India’s traditional food on a global stage.

The White Paper on Millets provides a suitable road map to ensure assuring of the millet revolution in the country. This revolution is critical so that we provide more nutritious food and stop the exploitation of water by water-intensive crops. This will also lead to meet its nutritional challenges while expanding the food processing ecosystem to cater to the domestic and export market.

Dr.Dayakar Rao, CEO of, Nutrihub proposed a vote of thanks to all the dignitaries and the Task Force Committee Members of the White Paper on Millets and to all participants of this event. Definitely, this White Paper on Millets will help in mainstreaming Millets for Nutrition Security in India. Finally, the event was a grand success.

Please do share your thoughts on White Paper on Millets and will be happy to hear from you.